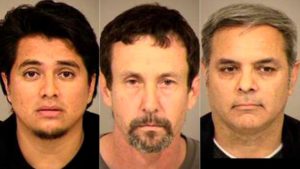 Christopher Allen Bouchard, 48, of La Crescenta, Reynal Reginio Guillen, 54, of Sherman Oaks, and Jose Juan Ramualdo-Posadas, 32, of Corona, were taken into custody without incident Friday after engaging in online conversations with investigators and arriving at an agreed-upon location, police said.

The multi-agency sting was conducted by personnel from the Ventura Police Department, Ventura County Sheriff’s Department, District Attorney’s Office and Human Traffic Enforcement Team, according to a news release.

“As the investigation unfolded, adult male sexual predators got onto the same chat room and contacted the undercover officer,” the news release said. “Each of the suspects engaged (the officer) in sexually explicit conversation, describing in detail what sex acts they wanted to perform with the teenage girl.”

According to authorities, each suspect agreed to meet and pick up the girl at or near what they believed was the teen’s home in the 2100 block of Victoria Avenue. (Read full article here)